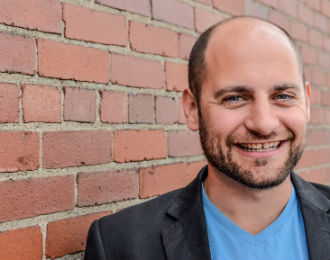 Brandon Blache-Cohen, named one of Pittsburgh’s 40 under 40 in 2012, has over ten years of experience in the nonprofit, service-learning, and international education sectors. Blache-Cohen first began experimenting with social entrepreneurship and service-learning while an undergraduate at the University of Pittsburgh. After sailing on Semester at Sea, he combined his passions of travel and social justice by helping to create a student-initiated NGO, FORGE. As Associate Director of FORGE he worked in three refugee camps in Zambia and Botswana on a slew of small-scale development projects. Since then, Blache-Cohen has worked in development for the Tahirih Justice Center in Washington, DC, as a researcher and program assistant for aids2031 in Worcester, MA, and as a consultant for several other small nonprofits and foundations.

In 2007, Blache-Cohen was named as a Social Change Fellow at Clark University, where he earned an MA in International Development and Social Change, focusing on nonprofit/NGO management. In addition to his work with Amizade, Blache-Cohen was a US delegate to the One Young World Summit in Zurich, Switzerland in 2011, has published several articles on responsible global service-learning in peer-reviewed journals, and since 2009 has sat on a planning committee for the Pittsburgh Holocaust Center. To date, Cohen has worked, studied, or traveled in around 70 countries, and has work authorization in the US and EU.

F.O.R.G.E. at the University of Pittsburgh