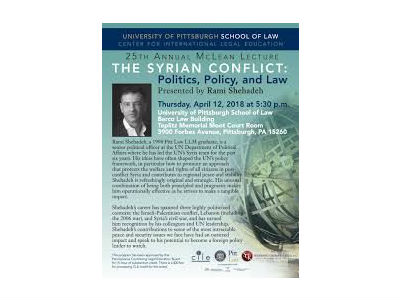 Come to the 25th Annual McLean Lecture on the Syrian Conflict

Rami Shehadeh, a 1998 Pitt Law LLM graduate, is a senior political officer at the UN Department of Political Affairs where he has led the UN’s Syria team for the past 6 years. His ideas have often shaped the UN’s policy framework, in particular how to promote an approach that protects the welfare and rights of all citizens in post-conflict Syria and contributes to regional peace and stability.

His unusual combination of being both principled and pragmatic makes him operationally effective as he strives to make a tangible impact.

Shehadeh’s career has spanned 3 highly politicized contexts: the Israeli-Palestinian conflict, Lebanon (including the 2006 war), and Syria’s civil war, and has earned him recognition by his colleagues and UN leadership. Shehadeh’s contributions to some of the most intractable peace and security issues we face have had an outsized impact and speak to his potential to become a foreign policy leader to watch.

University of Pittsburgh School of Law

Bringing the world to Pittsburgh for over 80 years