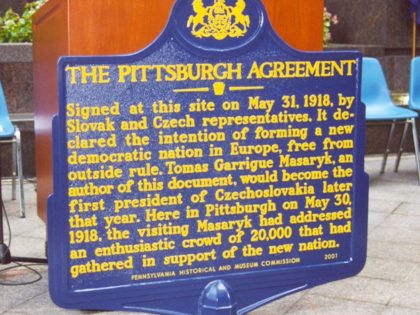 Hear about the history of our city!

The signing of the Pittsburgh Agreement on May 31, 1918, was a milestone leading to the establishment of an independent Czechoslovak state after World War I. The catalyst for the event was the visit to Pittsburgh of Tomáš Garrigue Masaryk (1850-1937), who led the Slovak and Czech independence movement and later became the first President of Czechoslovakia. By the agreement, Czechs and Slovaks in the United States, acting on behalf of their compatriots in Europe, sanctioned the endeavor to bring about a union of the Czechs and Slovaks in an independent state.

Admission free and open to the public