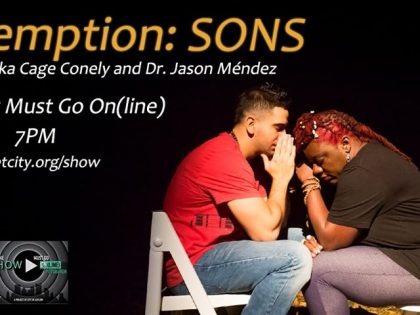 FREE! Part of The Show Must Go On(line) Pittsburgh series.

Redemption: SONS is hope. It is change. It is a parent’s soul split in two and fused back together again. An African American mother from Louisiana and a Boricua father from the South Bronx engage in a call and response “duologue” as they weave a story of race, ancestral memory, trauma, and healing.

Redemption: SONS premiered at the New Hazlett Theater in December of 2016. We will rebroadcast the full performance followed by a live question and answer session with creators Dr. Tameka Cage Conely and Dr. Jason Méndez.

The New Hazlett Theater’s CSA Performance Series supports five emerging artists each year as they develop a new work for the stage. The artists we choose have artistic visions that run the full spectrum of the performing arts. We are proud to know that the work produced at the New Hazlett contributes to the rich cultural fabric of our city.