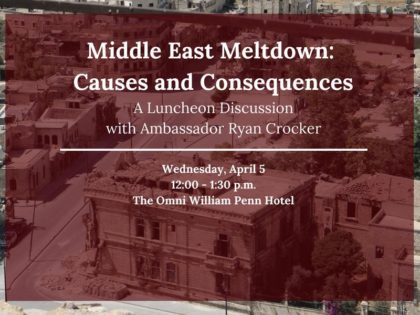 The current state of the Middle East is one of the most chaotic and turbulent times in modern history – with the rise of ISIS and other militant groups, ethnic tensions, and conflicts within countries, and a failure of governance in not one, but many of the Middle Eastern countries.

Ret. Amb. Ryan Crocker will present on issues pertaining to the Middle East and the cause and effects of the United States’ engagement in the region. Ambassador Crocker is one of the top experts in this region – when President Obama presented him with the Presidential Medal of Freedom, he called him “America’s Lawrence of Arabia.”