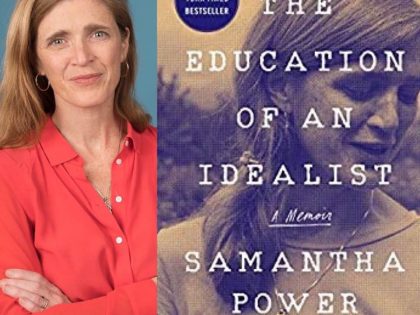 FREE! Part of The Show Must Go On(line) Series.

Ambassador Samantha Power, winner of the Pulitzer Prize, former human rights adviser to Barack Obama, and US Ambassador to the United Nations from 2013 to 2017, joins us to read from her new memoir The Education of an Idealist and speak about the state of the world. Power will be joined by Feyi Alabi, Special Initiatives Manager in the City of Pittsburgh’s Office of Equity and City of Asylum board member, to discuss questions such as: How do we accomplish change and international cooperation in times of closed borders and national self-interest? What changes are needed when facing the worst economic and social crisis in decades?

Samantha Power served in the Cabinet of President Barack Obama and as US Ambassador to the United Nations from 2013 to 2017. Power’s book “A Problem from Hell”: America and the Age of Genocide won the Pulitzer Prize in 2003, and she has been named one of TIME’s “100 Most Influential People.” Power is currently a professor of practice at Harvard Law School and Harvard Kennedy School. Her most recent book, from 2019, is the best-selling memoir The Education of an Idealist. Power traces her life story from her beginnings as an immigrant to the US through her work as a war correspondent in the Balkans and her ascent to the White House, where she served as President Barack Obama’s human rights adviser and became the youngest ever US Ambassador to the United Nations. Obama called the book “a must-read for anyone who cares about our role in a changing world.”