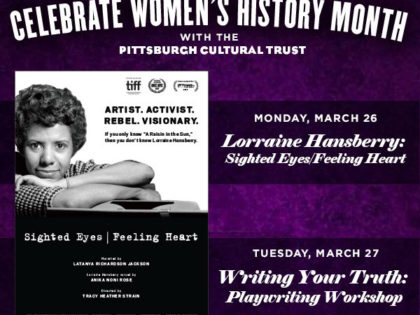 A Celebration of Women's History Month

Sighted Eyes/Feeling Heart is the first-ever feature documentary about Lorraine Hansberry, the visionary playwright who authored the groundbreaking A Raisin in the Sun. The film reveals Hansberry’s prescient works tackling race, human rights, women’s equality and sexuality that anticipated social and political movements on the horizon. Sighted Eyes/Feeling Heart features Tony Award®-winning actress Anika Noni Rose as the voice of Hansberry, interviews with Sidney Poitier, Ruby Dee, Harry Belafonte and Louis Gossett, Jr. and narration by LaTanya Richardson Jackson. Filmmaker and Peabody Award-winner Tracy Heather Strain (Unnatural Causes, I’ll Make Me a World) crafts the story of one woman who believed, like many of her generation, that words could change society.

After the film, join for a moderated panel featuring the creative team behind the film and a reception celebrating the film and the empowerment of women. Both the panel and reception are included with paid admission to the documentary. The reception includes complimentary hors d’oeuvres and live music by female jazz trio, A.I.R.