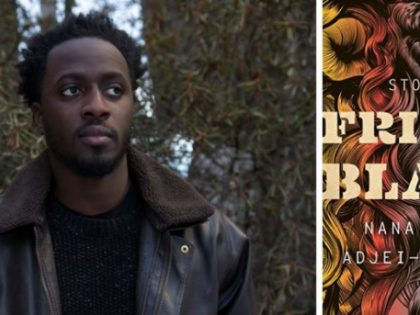 FREE! Part of The Show Must Go On(line) Pittsburgh series.

Authors Damon Young (What Doesn’t Kill You Makes You Blacker) and NANA KWAME (Friday Black) will discuss the trials and tribulations of putting out their debut books, publishing, their creative process, and other topics in this third installment of our new LIVE series “How to survive in America” hosted by Damon Young.

NANA KWAME ADJEI-BRENYAH is the New York Times-bestselling author of Friday Black. Originally from Spring Valley, New York, he graduated from SUNY Albany and went on to receive his MFA from Syracuse University. His work has appeared or is forthcoming from numerous publications, including the New York Times Book Review, Esquire, Literary Hub, the Paris Review, Guernica, and Longreads. He was selected by Colson Whitehead as one of the National Book Foundation’s “5 Under 35” honorees, is the winner of the PEN/Jean Stein Book Award, and a finalist for the National Book Critics Circle’s John Leonard Award for Best First Book and the Aspen Words Literary Prize.

Damon Young is writer, critic, humorist, satirist, and professional Black person. He’s a co-founder and editor in chief of VerySmartBrothas — coined “the blackest thing that ever happened to the internet” by The Washington Post — and a columnist for GQ. Damon’s debut memoir — What Doesn’t Kill You Makes You Blacker: A Memoir In Essays (Ecco/HarperCollins) — is a tragicomic exploration of the angsts, anxieties, and absurdities of existing while black in America, and won Barnes & Noble’s 2019 Discover Award. It was also longlisted for the PEN America Diamonstein-Spielvogel Award, nominated for an NAACP Image Award, and is a Krause Essay Prize nominee. NPR, which named it one of the best books of 2019, called it an “outstanding collection of nonfiction.” Damon currently resides in Pittsburgh’s Northside, with his wife, two children, and his faithful bottles of Nexium and Lisinopril.